The Quiet Power of Julie Frey

Getting him to Washington, D.C., was an all-hands-on-deck responsibility for the family.

Frey had the job of greeter at political rallies. At one event, she shook hands with a man entering the room. "So nice to meet you," she said. The man looked her in the eye and replied, "You met me before."

It was a deer-in-the-headlights moment for the introverted fifth-grader.

Recalling the incident from her firm’s conference room overlooking Orlando’s iconic Lake Eola, Frey says the first lesson she learned was to say "nice to see you," just in case she had met someone but forgotten. The second was: "Be friendly to everybody."

The experience might have been a crushing blow to some bashful kids, but it had the opposite effect on Frey. She credits her dad’s political career with developing her people skills.

Today, the veteran estate planning attorney is outgoing but still softspoken, able to talk with anyone about anything, including their most closely guarded family and financial secrets. She is known for plain-talking and for putting people at ease as she walks them through the planning process.

"Really, estate practice is a people practice," says Frey. "I can’t tell you how many clients I’ve had who say, ‘Ah! I finally understand what it is I’m signing. I’ve done this before, but no one’s ever explained it; they talk gobbledygook, and I’m embarrassed to ask a question.’"

She didn’t start out in estate law. In the mid-’80s, when Frey was a young attorney in Washington, D.C., where her dad was practicing law, she and a group of colleagues once attended a weeklong conference on corporate securities law at the University of Wisconsin.

A conference on estate law was underway at the same time.

Turned out it wasn’t boring for her.

Frey moved back to her hometown of Orlando in 1987 and joined Lowndes, Drosdick, Doster, Kantor and Reed, where she is now a partner. John Lowndes thought she would be a perfect fit for estate law, and that’s where she found her passion. She now chairs her firm’s private wealth services group, which she grew from basically herself into a group of a dozen members.

She provides strategies for high-networth clients, including pro athletes and others who have specific asset-protection needs. She also works with couples in second marriages, domestic partners, and people who have special trust needs or other concerns for their children. Digital asset management—who controls your passwords and social media presence after you’re gone—is becoming an increasingly major part of her practice area.

"When an individual passes away, there are not only physical possessions to distribute, but many have significant and substantial digital assets as well," says Frey. "Social media accounts, email messages, digitally stored documents, digital photographs, videos, digital music, domain names, online access to financial and other accounts, and cryptocurrency."

Failure to specify who can access which accounts can end in these digital assets being misused or lost, and can even result in fraud. Frey notes that clients may even want to have certain accounts—such as personal social media—deleted upon their death.

Estate planning isn’t just who might control your assets if you become incapacitated. The other big issue, she says, is "when you’re gone, what’s your legacy? What kind of legacy do you want to leave to your family?"

One thing for sure she has learned about her field: "Whenever there’s money involved, things can get interesting.

"People are oftentimes very quiet about what they own. I did a probate and trust administration for the family of a fellow who lived in a mobile home with the kind of furniture you put together by yourself, and he was worth $8 million."

She got involved in helping the family after he died, but because the estate planning had not been done properly in the beginning, the family ended up paying a lot of money to the IRS.

Another case she handled involved a woman who hadn’t talked to her son for 30 years and wanted to cut him out of her estate. Frey talked to the firm’s litigation attorneys and made sure everything was documented properly so the woman’s intent could be carried out. After she died, the estate was settled without litigation.

"Under Florida law," Frey says, "after your child is 18, you don’t owe them anything."

It’s something she jokes about with her own son Alex, now 27. "I have a lot of charities I like," she teases him, "so you better be good to your mama."

In a similar case involving an ungrateful grandson, the ending was more complicated. The grandparents had paid for his education at a private university, bought him a house and given him a large wedding gift. He never bothered to say thank you or to visit his grandmother after his grandfather died.

So Frey called him up and said, look, your grandmother is getting older and would like to see you. He wasn’t interested, so the grandmother cut him out of the estate. After she died, he sued for a share. Not only did he not inherit from his grandmother, he also lost out on a small percentage of a trust he had been expecting from his grandfather.

"Because the litigation brought was baseless," Frey says, "the court awarded us our legal fees from his share of his grandfather’s estate. He got zero."

Outside the office, Frey—known as Julie since fourth grade, since there were two Julias in the class and she lost the coin toss—loves to stay active playing tennis and golf. In 2001, she ran the Paris Marathon. She also recently started learning French—just for fun.

When her son was growing up, she was a baseball mom. He went on to play professionally overseas; and she and her husband, David Carter, a former professional tennis player who is now a Winter Park psychologist, would plan their vacations around his team’s schedule. Alex is now attending law school in Australia.

Frey’s family has a large footprint on Orlando’s economic and political arenas. Lou Frey Jr. won his bid to become a Republican congressman; before that, he was a well-known attorney, also working for a time at Lowndes Drosdick.

He went on to found the Lou Frey Institute of Politics and Government at the University of Central Florida. Instrumental in making Orlando the epicenter of the multibillion-dollar simulation industry, the elder Frey was a founder of the National Center for Simulation, also based at UCF.

Frey serves on the board of the Lou Frey Institute, and she has served as president of the Orange County Bar and of the Central Florida Association for Women Lawyers. She is currently on the Florida Bar Board of Governors, where she was just elected to a second term. She’s also nurtured her cultural side by serving on the board for Orlando public radio station WMFE. She and Carter also donate to local arts organizations and are promoters of the Atlantic Center for the Arts, a nonprofit artist-residency facility in nearby New Smyrna Beach.

While on the WMFE board, Frey found a kindred spirit in Judy Duda, a member of a prominent Central Florida family and an enthusiastic patron of the arts.

"We just instantly bonded," Duda says. When Duda, now 81, decided to remarry after being widowed for 15 years, she turned to Frey to handle the pre-nup and trust documents.

She needed the help, she explains—she and her husband, Col. Bud Weber, have 35 children and grandchildren between them.

"I feel like she really listened," Duda says. Merging the families of two mature adults with significant assets in 2015 was no simple task. "I felt really comfortable about all of the advice she gave me."

In 2013, Frey helped the station hire a new executive director, LaFontaine Oliver. She helped smooth his way into the community by inviting him to events and introducing him to local movers and shakers.

Her support, Oliver says, "was wonderful for me. It gave me that confidence that I needed as a new leader of the organization."

Frey’s people skills are what most impressed him.

He says, "There’s a quiet power there," which Frey put to use during what Oliver calls "seismic changes" to the organization, such as buying a second radio station. Frey served a second term as chair, at Oliver’s request, during the acquisition of WKSG-FM 89.5, now WMFV, just north of The Villages.

That same quiet power guides her dealings with her wide range of clients. A sense of humor doesn’t hurt, either.

"If I can get people laughing about something at our first meeting, that sort of breaks the ice," she says.

After all, wills and estates can be a grim subject. "Most people don’t want to think about wills," she says. 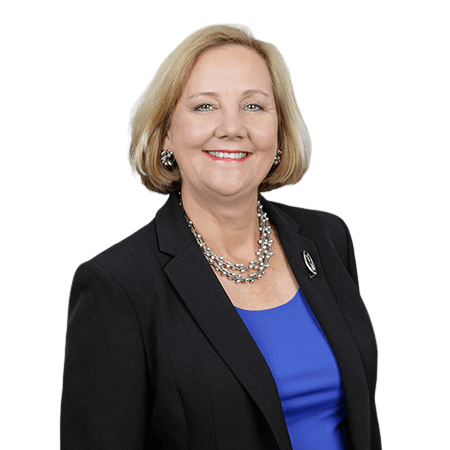 Julie Frey is a shareholder and chair of the Private Wealth Services group. She is board certified by The Florida Bar. Her principal areas of practice are estate planning, probate, trust administration, guardianship, elder law and federal tax.

Julie counsels a broad range of clients, including high net worth clients with needs for sophisticated estate planning techniques, physicians and others who have specific needs with respect to asset protection, couples who are in second marriages, domestic partners, “sandwich generation” individuals who have planning concerns for their parents, their children and themselves, and individuals with a net worth that may not be subject to estate tax but who have planning needs and concerns for children, special needs trusts and other important issues.

Since the nature of the estate and gift transfer tax system encourages gifts, Julie prepares a variety of irrevocable trusts that can serve as vehicles for making lifetime gifts to family members, thereby reducing the effective rate of transfer tax. Julie prepares federal estate and gift tax returns. She represents trustees and personal representatives in their administration of trusts and estates. At other times, she assists beneficiaries with the enforcement of their rights in an estate and/or trust.

Julie also represents parties with respect to trust construction matters and will contests with the firm’s litigation group.